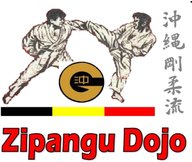 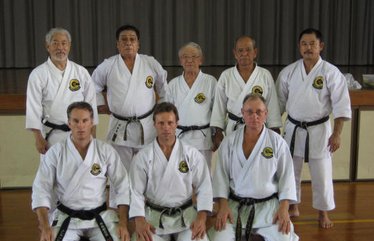 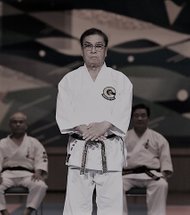 Born on November 24, 1925, Koshin Iha sensei first learned from Chojun Miyagi sensei at the age of 14. Upon the death of his master he assisted Eiichi Miyasato sensei in the instruction of students. From 1964 to 1975, he opened the Goju-ryu Shodokan Karate Dojo in Tomari, Naha City where he taught. In October 1969, on the suggestion of Eiichi Miyasato sensei, the Okinawa Goju-ryu Karatedo Association was inaugurated with Eiichi Miyasato as first president and Koshin Iha as vice president. Following the death of Miyasato sensei on December 11, 1999, he was elected second president by the board of directors of the Okinawa Goju-ryu Karatedo Association and acted as such until 2004.

Today, under third president Yoshio Hichiya, the Okinawa Goju-ryu Karatedo Association has its headquarters at the Hichiya Dojo located at 3-180-33 Ishimine-cho, Shuri, Naha City, Okinawa. The association consists of 10 dojo in Okinawa, six in mainland Japan, and others in the USA, Europe, Asia, and other parts of the world. Every year, the association holds a tournament in April and three dan examinations. It also organizes a study group the fourth Sunday of each month and carries out overseas seminars amongst other activities. Today, President Yoshio Hichiya is also the president of the Okinawa Prefecture Karatedo Federation.